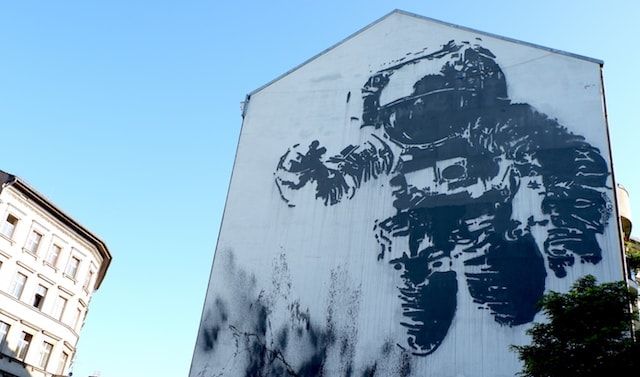 Vandalism for some, art in its own right for others, street art is becoming increasingly important on the world art scene. In all major capitals, urban spaces are populated with works of art, taking various forms and varied, but it is a city where this art has been able to impose and win its titles of nobility, Berlin.

Street art or urban art is not new, this form of artistic expression was born in the 60s under the impulse of artists such as Mizui, Vasarely, Calder and Allan Karpow. The latter wrote about street art: “art has shifted from the specialized object in the gallery to the real urban environment.” Originally considered as a kind of alternative contemporary art, it has little by little affirmed as an autonomous movement. This form of artistic expression has been greatly popularized by artists such as Shepard Fairey in the United States, Banksy in Britain and his film Exit through the gift shop. Blu in Italy or Oakoak or Zlotykamien in France.

Berlin is considered as the mecca of Street Art and as “the city of design” by Unesco. It is a phenomenon inked in popular culture. Just think of the ripe Berlin before its fall. There were graffiti, paintings and messages. This art allowed people to express themselves. One of the most prominent posters is Roland Bruckner’s Linda ex (Linda’s ex), depicting sad male figures who asked Linda’s whereabouts after desperate messages from her ex to find her. It was of course a story invented by the artist.

To discover the art of the street, it is in the district of Friedrichshain and that of Kreuzberg that one finds it more. There is so much graffiti and drawings that it is almost impossible for us to identify one. In the district of Friedrichshain we find the murals after bombing covered with graffiti. It’s an explosion of colors. In Kreuzberg, if you take the Skalitzer street, you will find famous graffiti such as the Astronaut Ash, a huge stencil created for the festival Backjumps or also Yellow Man Os gemeos. Still in the same neighborhood, we find the famous wall of the Italian artist Blu. Many other artists have painted on the same wall that can not leave indifferent.

On the other side of the river, in East Berlin, crossing the river, you will find a graffiti map of the city. Finally, in Friedrichshain is the East Side gallery, the most beautiful and rich outdoor gallery in the world. It preserves a piece of the Berlin wall. This magnificent gallery exhibits paintings by artists from all over the world. Among the works we find for example the Kiss of friendship between Erich honecker and Leonid Brejnec.

Berlin has become one of the capitals of street art, which is not surprising given the number of German artists operating in the capital and around the world, including EVOL, which works stencil and the aerosol paint spray, also known for its miniature paperboard-based buildings, to build a whole city of nearly 80 square meters. There is also Hendrik Beikirch, TONA. These artists have made the city of Berlin a city of works of art.

But the artist who becomes more and more ubiquitous in Berlin is El Bocho. He glues posters where are drawn and painted characters that he invents and reminiscent of a play. He makes his actors play by giving his works a bit of black humor but always poetic.

This is the perfect opportunity to discover the city, whatever the season. In Berlin, you will not miss any art! In addition, nothing more simple than booking a low cost flight, a room, for example on venere.fr and leave! So do not wait any longer!